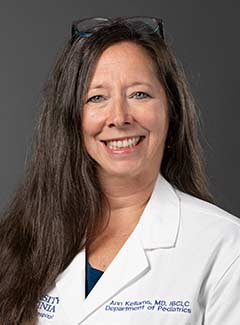 Ann Kellams, MD, is a board-certified pediatrician, international board-certified lactation consultant, and a professor in the Department of Pediatrics. She has been practicing general pediatrics since 1995 and joined the faculty at UVA in 2006.

Kellams served as the medical director of the newborn service at UVA from 2006 to 2018. In 2011, she helped found the UVA Breastfeeding Medicine Program, which she still directs. In 2019, Kellams became vice chair of clinical affairs for the UVA Department of Pediatrics.

Throughout her career, Kellams has worked to develop her skills as a clinician and a leader in the field of pediatric medicine by participating in a variety of programs, including UVA Leadership in Academic Matters (LAM), Quality and Safety Leadership in Academic Medicine (QSLAM), the Humanities in Medicine Fellowship, as well as the Institute for Healthcare Improvement’s course on joy in the workplace. Kellams teaches a course at UVA Medical School called the Healer’s Art, a course she helped create as a medical school student, about finding meaning and humanism in medicine, which is now being taught at approximately half of the medical schools in the U.S.  Kellams is also an active researcher and has received multiple grants to study infant care practices, such as safe sleep and breastfeeding.

Kellams and her husband met in medical school and couples-matched for residency training -- she in pediatrics and him in family medicine. The couple has lived in Charlottesville since 2001, and they have three children who are now in high school and college. They also have one dog, three cats, a fish, and a hedgehog, and they foster kittens for the SPCA. In her free time, Kellams loves to cook, wine-taste, watch movies, and spend time with family and friends.