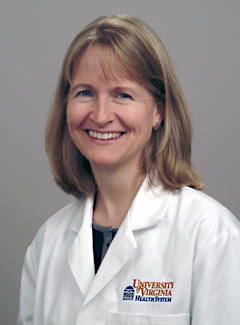 Effects of hypothermia on gene expression

Karen Fairchild, MD, is a professor of pediatrics at UVA. She cares for infants in the Neonatal Intensive Care Unit (NICU) and Intermediate Care Unit (ICN).

Fairchild leads several National Institutes of Health (NIH)-funded research programs, including one study aimed at developing early warning systems for sepsis in ICU patients. She is co-principle investigator on a multicenter clinical trial for VentFirst, which helps extremely preterm infants breathe during delayed umbilical cord clamping. Along with her colleagues in the UVA Department of Medicine, Fairchild is also helping lead the NIH-funded PreVent study to better understand apnea of prematurity or prolonged periods in which a baby stops breathing as it relates to respiratory outcomes.

Fairchild was raised on both coasts, in Seattle and then North Carolina. She graduated from Wellesley College with a degree in French studies, spent a few years in France, and then went to Duke Medical School. She completed her pediatrics residency at Johns Hopkins University in Baltimore, followed by a neonatology fellowship at Children’s Hospital of Philadelphia. She joined the faculty at UVA in 2004.

Fairchild and her husband live in Earlysville and have two adult children. She plays cello in the Waynesboro Symphony and enjoys spending weekends on the Rappahanock River, hiking and traveling.