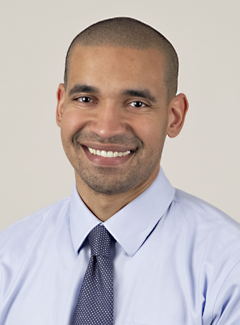 Mr. Thomas was born and raised in Virginia Beach. He stayed in state for college, earning a bachelor’s degree from James Madison University. He received his master’s degree in genetic counseling from Johns Hopkins University.

In 2007, Mr. Thomas returned to Virginia and joined UVA as a pediatric genetic counselor. Six years later, he founded the first cardiovascular genetics program in Virginia.

As a cardiovascular genetic counselor, Mr. Thomas works alongside cardiologists, surgeons and nurses to care for children and adults with inherited heart and vascular diseases. He sees patients with a variety of conditions, including heart muscle diseases, heart rhythm diseases, aneurysms and high cholesterol.

Mr. Thomas was appointed by the governor to serve on the Advisory Board of Genetic Counselors after licensure was passed into law. He served as chair of the board from 2014-2017.

Mr. Thomas lives in Charlottesville with his wife, Shannon, his dog and two cats. He enjoys going out to dinner with his wife and friends, working out at the gym and binge-watching a good TV series.