Babies in the NICU are at risk for several types of infections. We look at data from independent sources to measure how well we're doing at preventing infections compared to other NICUs across the country.

A late nosocomial infection is a type of healthcare-associated infection that develops more than 72 hours after birth from a bacteria or virus not spread from the mother. 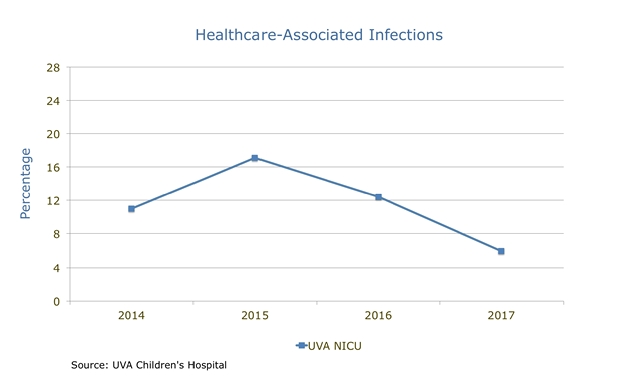 The national average of nosocomial infection prevalence for infants weighing between 1.1 and 3.3 pounds was 15.0 percent between 2000 and 2009 among North American hospitals in the Vermont Oxford Network. This is the most recent data available for this metric. Source: Horbar et al. Pediatrics 2012; 129:1019.

Central lines are small tubes that provide fluids, medications, blood products and nutrition supplements to the baby. It’s possible for infections to enter the bloodstream through a central line.

We measure central line-associated bloodstream infections (CLABSI) using the National Healthcare Safety Network Standardized Infection Ratio, which takes into account the type of NICU and the babies it treats. The network is maintained by the Centers for Disease Control and Prevention.

Any number below 1 shows fewer infections than expected at a Level IV NICU. Level IV NICUs, like at UVA, provide the highest level of care possible. 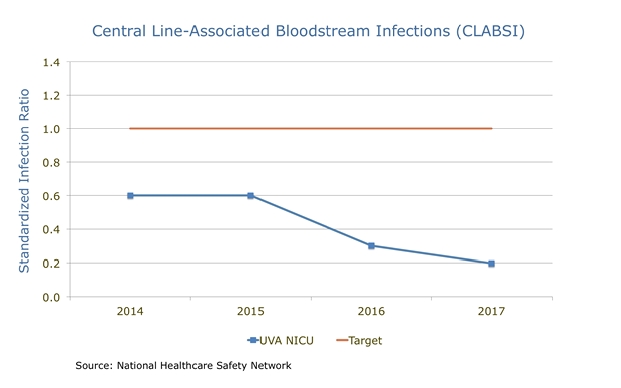