Babies in the NICU are at risk for certain respiratory (lung) complications. 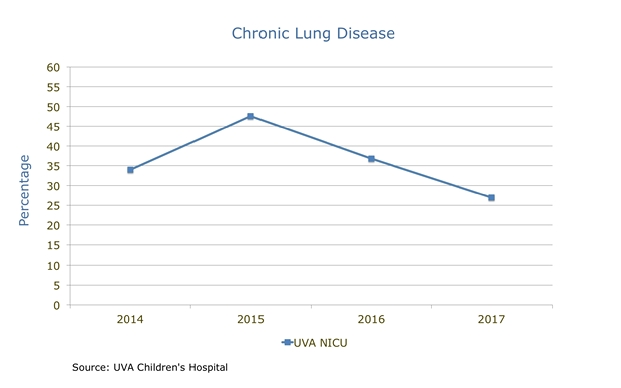 The national average for the prevalence of supplemental oxygen at 36 weeks corrected gestational age for infants weighing between 1.1 and 3.3 pounds was 26.3 percent between 2000 and 2009 among North American hospitals in the Vermont Oxford Network. This is the most recent data available for this metric. Source: Horbar et al. Pediatrics 2012; 129:1019.

A machine called a ventilator helps babies breathe easier. A breathing tube sends oxygen from the ventilator to the baby’s lungs. Caregivers must attach tubes securely and watch them closely so they stay in place.

Unintended extubation happens when a tube comes out when caregivers had not planned to remove it.

We measure unintended extubation per every 100 patient days of ventilator use. One baby using a ventilator for one day equals one patient day.

The NICU is working with the UVA Department of Biomedical Engineering to develop a device that makes sure breathing tubes stay in place. The NICU has also developed standard processes to make sure we gather important information when an unintended extubation happens so we can learn from each one. 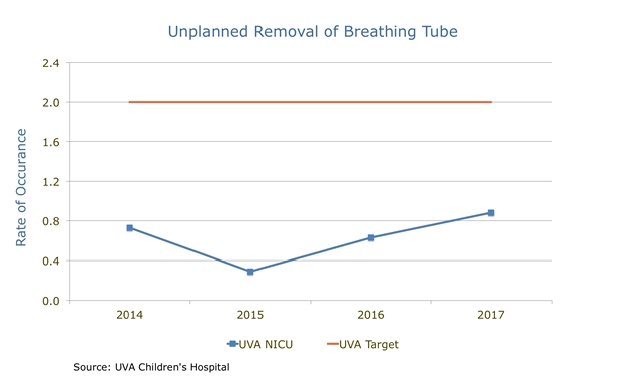 Unintended extubation, measured per 100 ventilator days, among babies admitted to the NICU at UVA Children’s Hospital.